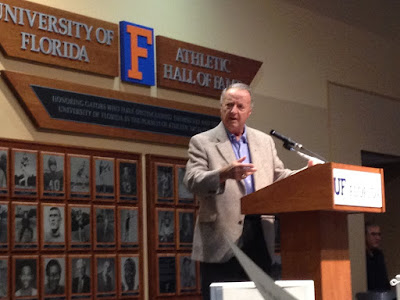 “Isn’t it funny…me being here?” a voice rang out in a familiar Alabama drawl. The voice was that of former Florida State Head Football Coach Bobby Bowden who had returned to Gainesville not for football but for the annual North Florida Fellowship of Christian Athletes Banquet. Throughout his talk Coach Bowden stressed the importance of such organizations in the lives of young people. Members of Morgan Auto Group and Wade Raulerson Buick GMC attended to be recognized for their recent contribution to the organization. Coach Bowden remarked that when he was growing up you might find 10 young men in a room and 1 without a father. “Now,” he said (in some places) “that might be reversed.” Coach Bowden highlighted the leadership roles that coaches fill in the community but also in students lives. He also touched on his two national championships and success as a football coach but remarked you can’t take it with you. “I get letters from my former players all the time, and you know what? They never are about football (and the team’s accomplishments).” He said the content of communication with past players was mostly about the impact that he had had in their lives and about their families. He remarked that one day his national championship trophies would “turn to dust.”

Over 500 people were in attendance at the Swamp’s “Touchdown Terrace” which included personal recognition of former dealer owner Wade Raulerson and his wife Paula and several long time Wade Raulerson Buick GMC customers. The grass roots efforts of the local FCA extends far into the University of Florida as well as area high schools. The evening included hearing from UF and local high school students on the impact of FCA. One of the most profound talks came from Brian Allen current head coach of Columbia High School in Lake City. Brian was a former player of Coach Bowden’s and remarked that he was swayed by some of the temptations that exist for college athletes. “BUT Coach Bowden was always leading us off the field too, to become better men not just great football players.” He remarked that now as a coach of his own team he was able to “pay forward,” the impact made by Coach Bowden.