Florida Governor Rick Scott stopped by our Brandon Honda store near Tampa this past Wednesday to reinforce a major proposal that could amount to $400 million in tax savings for Florida drivers. The tax break would reverse some of the legislation we saw in 2009 that sent tag renewals to record highs. As a dealership employee we often electronically administer this work for customers so naturally we heard the negative response in a major way. In my opinion this move is also a symbolic break from much tougher days...both for our state and car dealers.


#1) He's more personal than people give him credit for.

Like my father, Governor Scott is a mid-western boy by birth and college education. Also like my father he came from humble beginnings in life. He had done his research on my father and while that's what a good politician should do - it was a neat conversation to watch. Say what you will say about them both - but a self made man is exactly that in many respects. Success was neither given nor destined for either. In fact I would also throw our partner John Marazzi into that same breath. These are men who have succeeded in life through hard work, determination in spite of what others were able to provide them in life. Their lives have been more about what they have been able to provide to others in the way of opportunity, growth and success. Don't feel that way about the Governor? That's fine but I'd read this human interest piece and take a break from the politics for a minute.

The Governor also made light of his friendly competition with Texas Governor Perry and a small bet he had with the Alabama Governor over the recent BCS National Championship between Auburn and FSU.

#2) He looks like Peter Garrett, the lead singer from Midnight Oil.

Ironic maybe that Garrett, is now an Australian politician. Wait? As I was creating this graphic below I googled both names hoping someone already did my work for me. They hadn't, but I did realize Jon Stewart from Comedy Central had already made this joke. So not cool. Jon went to my rival college (College of William and Mary) as I am a Richmond Spider. I no longer like my own joke. At least if you know of Midnight Oil we know you have good taste in music. Moving on...I digress... 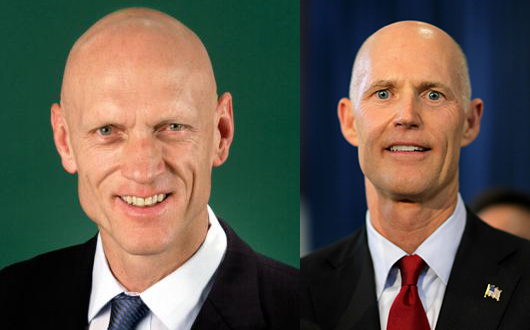 "They should be!" Stop muttering under your breath...I can hear you. Seriously, yesterday's announcement was a very positive thing. But since he had alluded to it previously at a Tampa press conference some 30 days ago this was most certainly overkill! I didn't feel that at all. This time he decided to return to an appropriate venue (locally owned car dealership), on a slow news day, and talk about the savings and this time with more specificity. I figured he'd gotten it right. Every piece of media written though basically waxed the same...

"Clearly interested in publicity in the politically crucial Tampa area about a tax cut, Gov. Rick Scott made a second appearance in Tampa in less than a month Wednesday to talk about his proposed cut in vehicle registration fees."

Wow even the Tampa Tribune is worn out by two local visits in a 30 day period! Like you've never written virtually the same article before? Ha!

#4) People don't see the big picture anymore in politics. They remember only issues (and moments) the media magnifies. And they speak with a venom that makes me sad for my generation.

People don't look at the big picture, the small victories or potential future gains in politics. My guess is that between the "he's not personable" perception of Rick Scott and issues like the proposed drug testing of welfare recipients that he's gained some enemies. My opinion is that these things sort of become "Red Herring" issues in the sense that they aren't within the top 10 opportunities and challenges facing our state, but all the same they become defining. I would argue the same on the other side of the isle for what happened to former Governor Crist. His brief embrace with Barack Obama lead to his eventual political cross-over. The sad part is as state residents (specifically younger people) we hang our hats on these moments. We close our ears to Scott's vision of a state with a greater draw of large employers. We stop listening when he uses the example of cities like Austin, Texas as a creative and growing city he'd like to see replicated in Florida. We stop peeling the onion and driving towards the core of what could make a better Florida. We roll our eyes and say, "there goes the idiot who wants welfare recipients to be drug free to receive our benefits." When Governor Scott talked about us taking a greater, deeper pride in our state...I was moved. Those are the kinds of beliefs that can bring people from all walks of life together. We grasp at the negatives far too easily...

Don't believe me? Within moments of posting on our Facebook page about the Governor's visit we received the following comments:

"Great you got to meet the Governor. Just sorry it was THAT one."

"Ask him how much money he plans to make drug testing all of florida? He voted for drug testing for welfare and state employees because he owns the largest drug testing provider in Florida. Hes an asshat"

"I couldn't agree with you more. Hes one of the worst thing thats happened to florida."

Truth is we probably always spoke this way, save maybe the "asshat" remark. It's Social Media that has now given every one a voice into a stranger's living room and that's both exciting and terrifying to me. Freedom of Speech is important but I'm probably not wrong if I am assuming that these are opinions being formed on a few basic factoids. I'm trying to be more balanced in my approach in life. Am I saying that the Governor deserves your respect just because he is the Governor? No. What I am saying is that if a large majority don't we probably aren't moving anywhere as progressing people. In walking the room that evening and speaking with many of my business associates we all agreed we wouldn't have the stomach for politics. CAR DEALERS not being able to stomach something? Yes. That's what I said.

When Governor Scott first got out of the car yesterday he first asked about the healthy of our business. It's funny, growing up with an entrepreneurial father you notice some things. One of my greatest takeaways is watching the personal growth opportunities a business leader can provide to so many. The Governor was pleased to hear our business was growing in the post-recession and eluded to a Florida's fiscal health and the success of "smaller government" and a solid foundation moving forward. This philosophy right here is at the core of what drives entrepreneurial America. I am a huge believer in the impact we've made in our communities as entrepreneurs. Bigger more inefficient governments can drain of our own tax revenues while stunting the growth of many whose success paves the road of opportunity for others. That's a BIG PICTURE issue that is effecting our state here and now.

I just hope the next time the Governor (or another politician you consider an asshat) sincerely speaks up, you listen - and don't get lost in the sound-bytes and "red herrings." You might just learn something.
Posted by Brett Morgan - Morgan Auto Group at 7:36 PM 1 comment:

Top Ten Things I can do with my Blackberry 10 That You Didn't Think I Could:

1) Sync my iTunes library to my Blackberry 10 device.

Oh yes you can! And through the native Blackberry link application! It's easy!

Try the new "Built for Blackberry" application "Say It" which now runs "headless," meaning the window does not need to remain open.

I have a 2011 GMC Terrain SLT. In that production year bluetooth streaming of internet radio or really any media is not supported. How did I fix this?

I purchased a Blackberry bluetooth gateway and attached it in an attractive fashion (using velcro) under my arm rest. The gateway has a power source and feeds nicely into the auxillary port thinks to some good thinking by GMC. So now when I step near my car it's ready to rock tunes right off my phone.

Yep, that's true. But thanks to the beauty of HTML 5 and the best Blackberry browser ever I have simply created Home Screen links to these accounts. Don't like that? Well you can always try sideloading Android apps (I have done this and to mixed success). Google Drive? No problem, I'm utilizing the "Cloud Explorer for Google" application and I am all set.

Yes Blackberry 10 has some great applications that work very well with your Sonos wireless sound system.

Ok honestly, I'd be doing a lot more on Instagram if it weren't for the fact that they won't develop an application for Blackberry. Blackberry hasn't developed one either. The best experience I have found is with "Blackgram," a newer application available on Blackberry 10. Functions are to a degree limited but if you can't get to another mobile device at least I still can participate.

I've tried to utilize other travel applications to organize my busy business/leisure travel life. Blackberry Travel is a native application that works well by pulling reservations and travel plans out of my e-mail. Want to search for local restaurants and get the weather to where you are going? It's simple. Also any flight changes or status updates come right into your Blackberry 10's notifications. It's fantastic.

It needs some work but look for Blackberry to make a real investment here in 2014. Could it one day be a leader among the likes of Viber, WhatsApp, KIK Messenger and Snapchat? I repeat...needs some work! BUT everyday I do utilize BBM and wish more in the US did as well. The best upside is that unlike Apple's iMessage it's available on Android, Apple and BB devices. Can't say that for KIK and Snapchat.

9) Native integration with Evernote and Dropbox show why Blackberry still wants to build the best phone for business on the planet.

What did Melanie Griffith say in that Harrison Ford classic "Working Girl" in the 80's? A mind for business but a body for sin? Yeah that works here too. Maybe.

No idea what I'm talking about?

10) Video chat? Well until my friends come around to BBM Skype is where it's at...but it too does perfectly well on the BlackBerry 10.
Posted by Unknown at 3:10 PM No comments: