BMW hits a homerun with the Miracle League of Manasota 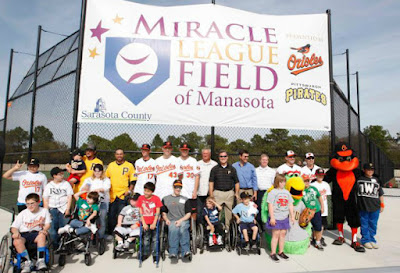 BMW of Sarasota’s Victor Young, Ed Seymour, De’Vone Brownlee, Charles Wilson,
Brian Doonan and Matthew Mesquita have all been personally involved in the
effort. On March 3rd the Miracle League celebrated their first local
practice and assigned to BMW of Sarasota was a special young man named Joey Barr
(pictured). Joey is an awesome baseball player and one of only 2 children that
didn’t need a tee to hit a ball. Joey is 10 years old and has been battling
Leukemia since the age of 2; he just recently finished his treatments. Prior to
completion he wasn’t able to be in sunlight or enjoy outdoor activities, so his
father built a room in the house where he could play baseball. When asked
whether he would prefer to be a Pirate or an Oriole, Joey said “I want to be a
pirate because then I’ll have (the) strength to fight my cancer.”

Great job Victor Young and TEAM BMW for investing in such a worthy cause in
the communities of Manatee and Sarasota Counties!
BMW of Sarasota