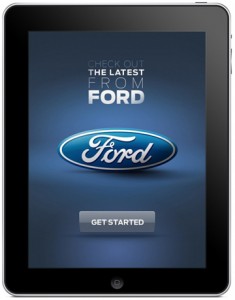 When you buy a gift card at Starbucks you have the option to place the card directly on your Smart Phone. When you order a pizza online you can track the Pizza’s progress from the oven to your driveway.  If you were speaking to Ford’s Vice President of North American Sales Ken Czubay he would tell you Ford is behind on the technology front and they know it.

Czubay, whose LinkedIn profile states he is Ford’s “Sales Guy,” is counting on Apple iPads to increase customer engagement. He spoke recently in front of a packed house at Wesley Chapel’s Saddlebrook Resort in Wesley Chapel during Ford’s regional Southeast business meeting. The tablets will be launched in both Sales and Service with a variety of applications targeted at giving customers a greater and more efficient experience. In Service applications will quickly pull up a customers vehicle history and offer an efficient RO build.

Ford began using tablets and their new “Showcase” application recently through a Dealership opt-in program. The application is an extension of Ford.com allowing vehicles to browse inventory and customize the Ford order of their dreams.

Czubay admits that despite Ford’s recent strides they need to become more of a car company being that the opportunity with their best selling F-150 truck is limited. While Ford’s Mike Rowe-lead commercials are favorably received customer loyalty is flat on both of the arena: sales and service. Whether or not tablets become a part of the successful culture of Ford remains to be seen but will in a large part come down to execution. Ford admits that until they find a differentiated customer strategy at the dealership level they will still be haunted by third-party Internet providers like TrueCar that offer and deliver a unique customer experience.

Posted by Brett Morgan - Morgan Auto Group at 9:00 AM